Virtual YouTuber Wiki
Register
Don't have an account?
Sign In
Advertisement
in: French, Debuted in 2020, Female,
and 3 more

Aquakwa is an independant french vtuber and vstreamer since November 13th 2020. She is a fusion between two beings: a bunny from the Moon and a girl from the Earth. The two friends reunites at night, becoming Aquakwa, in order to spread their common dreams accross the world. Aquakwa is also an artist aspiring to publish her own webcomics. She speaks mainly in French during her streams, but she can also speak English and Spanish.

Aquakwa mainly streams two kind of content: art and games. She draws original characters and commissions. She's good at playing RPGs and rythm games. She also plays League of Legends, Overwatch and other multiplayer games with other french-speaking streamers. She sometimes does live karaoke sessions. She also has a youtube channel where she publishes speed-drawings, song covers, stream highlights and vlogs.

Aquakwa is also the official artist of a independant video game called Guide's Chapter with french streamers MemoArt and Otharor.

In this world, there are some people who believe that there is a rabbit on the moon. This is what gave birth to Kwa, a magical rabbit living on the moon. He was feeling lonely but was able to hear people's wishes thanks to his two long ears. One day, a shooting star passed near the moon, and a human girl made the wish to never be alone again. Kaw the rabbit jumped on the shooting star and went straight to the lonely girl. They became friends and decided to merge into one. 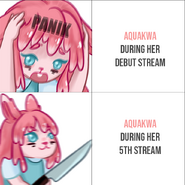 Illustration for Aquakwa's cover of the Moon Song

Community content is available under CC-BY-SA unless otherwise noted.
Advertisement