She is voiced by Yang Qian (杨倩).

Ciyuan started out as the mascot of the mobile game Super ACG.

On June 26, 2016, she became a new member of the Chinese idol group SS Idol, under Lianmeng Media,[1] and often appeared alongside them, be it on live performances,[2] or game promotion campaigns.[3][4] 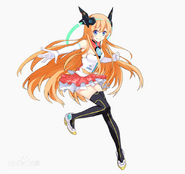 Ciyuan as she appeared when she was on SS Idol.
Add a photo to this gallery

Retrieved from "https://virtualyoutuber.fandom.com/wiki/Ciyuan-chan?oldid=15907"
Community content is available under CC-BY-SA unless otherwise noted.