VShojo is a US-based VTuber organization based in San Francisco.

The company was founded in 2020 by former Twitch employee Justin “theGunrun” Ignacio and Youtuber Phillip “Mowtendoo” Fortunat, with the vision of creating an organization where the talent have complete freedom. Its goals are to provide members with in-house tech, legal, PR, sponsors, upgrades, opportunities, social media expansion and a positive environment. As of May 2021, the organization has more than 3 million followers on Twitch and 3.5 million subscribers on YouTube.

VShojo is a talent-first VTuber company, dedicated to the growth and success of its members.

"Founded by fans of VTuber culture, we aim to create and foster content that pushes the boundaries of VTubing and talent freedom, while maintaining deep respect for the people and companies that helped paved the way."[1]

VShojo was founded by Gunrun, who worked at Twitch from 2011 to 2018, and Mowtendoo, a popular YouTuber, as well as a video game developer with expertise in 3d motion graphics, video production, and professional music production. The project had been in the works since at least as far back as August 2020, with the web domain vshojo.com registered on August 9, and the Twitter account @VShojoOfficial created that same month.

On 24 November, Nyatasha Nyanners, Zentreya, Ironmouse, Silvervale and Projekt Melody made their official redebut. All five were existing popular VTubers streaming on Twitch. A debut video announced these five members and an additional two: Froot, the VTuber formerly known as Apricot; and newcomer Hime Hajime.[2] Froot's debut was scheduled for 27 November.[3] Hime's debut was delayed to an unspecified future date.

Lewdcast, a weekly variety VTuber podcast hosted by Melody, Ironmouse and Silvervale also became affiliated with VShojo upon the company's announcement, having been previously run independently by the three.

On 31 January 2021 (Japan time), Hime finally made her debut on Twitch. This makes the first VShojo member to make her initial appearance after the group's creation.

On 9 April, Veibae was announced as a new addition to VShojo.

On 13 April, VShojo members Ironmouse, Froot, Silvervale, Veibae and Nyatasha Nyanners played with prominent Japanese VTubers Kizuna Ai, Higuchi Kaede and Dennou Shojo Siro in a collab called #VAmongEarth.[4] The original plan was to include Inaba Haneru in place of Silvervale, but she had to cancel at the last minute due to illness.

On 24 April, Nyatasha Nyanners performed with Japanese VTuber Kizuna Ai at her Virtual US Tour.

On 22 May, VShojo members Ironmouse, Silvervale, Veibae, and Nyatasha Nyanners attended the DigiKomi convention, where they played a game called "Otaku Exposed!".[5]

On 16 June, VShojo made their first collaboration with hololive, between Nyanners and Takanashi Kiara. The event was streamed on both YouTube and Twitch,[6] and attracted a peak total of around 40,000 viewers across both sites.

On 19 June, another hololive EN collaboration between Ironmouse and Mori Calliope was streamed on Twitch and attracted nearly 25,000 viewers at its peak.[7]

On 6 August, both Veibae and Froot where interviewed by BBC NEWS about spreading the word about Vtubers in the UK.[8]

On 20 August, VShojo announced that they are holding auditions for new members.

On 13 December, VShojo announced both the start of a partnership with GoodSmile_US and a nendroid from Nyatasha Nyanners.[9]

On 18 December, Ironmouse, Silvervale and Nyatasha Nyanners participated in VILLS vol. 3, one of the biggest VTuber events in Japan. The group enchanted the audience with their vocal performance and the new VShojo VILLS idol costumes.[10]

On March 3rd, VShojo announced that they would be holding a week-long fundraiser for [projecthope.org Project HOPE], a humanitarian charity helping out during the humanitarian crisis in Ukraine.[11][1]

On 1 April, April Fool's Day, VShojo announced a rebranding into GShojo, with the various members being replaced by gecko-ized versions that were initially introduced by Zentreya.[12][13] 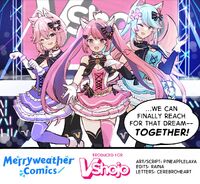 VShojo idols at VILLS 2021 by Yoolie 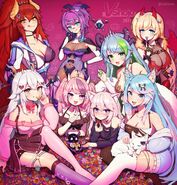